A Voice Behind a Veil 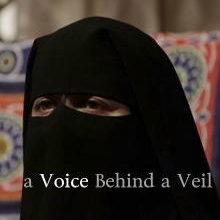 I am a muslim women. I wear the niqaab (face veil).

I’m one of those to whom the new law in France would apply. I’m one of the ones being discussed by politicians, human rights groups and the media.

I’m one of those whom many feel the need to liberate.

I’m one of those you may think is oppressed.

I’m one of those whom you may believe is uneducated; one of the ones you may think has no voice.

I am not Arab, Asian or even African. I am Australian. No, not ‘first generation’, ‘second generation’, or an immigrant. On my mother’s side, I’m of French-Canadian descent, and on my father’s side; British. I grew up as a Christian, and attended church occasionally. I was in the school swim team, and district netball team. I holidayed with my family in the summer on the Gold Coast, and I’m educated. I have a university degree.

When I was 18 years of age I was introduced to Islam. I studied it, and accepted it a year and a half later. By the time I reached 20, I was wearing the headscarf, and after I married I donned the niqaab.

Because of my husband? No.

My husband did not want me to wear it, although his mother and sister do, and out of respect for his wishes I didn’t do so for two years. But I wanted to, and eventually did, and knowing it to be in line with our religion, my husband knew he had no authority to prevent me, and he now greatly admires my strength.

Then, I wore it because of my father? No . He’s a catholic.

Because of my brother? Nope , haven’t got one.

My uncle? He’s an atheist.

Then because of my son? My eldest is only 8 years old. Then why??

Because I want to, that’s why.

And seeing as though my niqaab does not hurt anyone, that should be sufficient reason for all of you liberals of a liberal society; I should be able to finish my discussion right here. But although it may be so for any other style of dress, it isn’t enough when it comes to niqaab for some reason. You want more. So I will continue.

What makes me want to then? Two things: Faith and experience.

Faith? Yeah, faith. Faith in my Creator , faith in His decisions, faith in Islam. A deep faith. Many wander at the faith of Muslims, at their conviction and their commitment. It’s a faith, that if you are not Muslim, is hard to explain or describe. The scripture of Islam, the Qur’an has scientific miracles in it, such that have captivated scientists globally, leading many to accept Islam. Moreover, the Qur’an has not been changed in over a thousand years, since it was revealed; not one letter moved from its place. I dare say there isn’t a religious scripture like it, and this lends a clue as to the root of such faith.

In the Qur’an, Allah Ta’ala tells us to cover ourselves, ‘so as to be known, but not molested’. So our covering is a protection; a liberation.

Protection? you ask. Liberation? From what?

This is where I move on to my second reason for veiling. Like I said, I grew up in a Western secular society, in true Western secular style. I dressed secular, lived secular, and enjoyed all the ‘liberties’ of such a society. Did I feel liberated, free? Suffice to say, we were taught we were, so I never thought to think otherwise. It wasn’t until I became Muslim, and started covering, that I really felt liberated, and realised, before that I wasn’t.

Yet, time and time again we hear it said that we Muslim women are forced to veil, are oppressed; treated by our men folk as nothing more than ‘objects.’ And that niqaab, burqa, hijab; whatever term you use, is a form of ‘imprisonment’.

But what about the imprisonment of anxiety and depression?

What about the imprisonment of anorexia and bulimia?

What about the imprisonment of frequent rigorous exercise routines?

What about the imprisonment of always feeling the need to look like the super-model on the cover of Cosmo, or the pop-singer in the music video?

What about the slavery to fashion?

What about the entrapment of jealousy??

How many women waste their hard-earned money, destroy their physical and mental health, expose their bodies to vulnerability, abuse and extortion in order to…… in order to what??

And yes, it seems even other women too. So it seems non-Muslim women are not only slaves to men, but slaves to society as a whole.

Before you scream your disagreement, which many of you may do as a knee-jerk reaction to being told you’re also oppressed , stop and think. Look around you, contemplate society today, and its values, its aspirations, its goals, its direction, its past-times, its hobbies….

What good has it done for women to doff more and more clothing?

What good has it done for images of uncovered made-up women to be plastered on every billboard and magazine, on the TV, in the movies, and on the net?

Has it really brought any good for women?

The women in the images may aptly feel good about themselves for a while, but what does it mean for every other women?

Women who look upon these images usually become anxious, jealous, unsure and critical of themselves, or all of these things. Many men who view them will become aroused, or even unhappy, less satisfied with the partners they already have. What can, and does this lead to?

Cheating, dumping, chastisement, and even harassment of other women, and even children by, men who cannot find a legitimate outlet for their constant arousal. And yes, I can hear some of you; ‘then the men must control themselves!’ Frankly speaking that argument is well spent, not to mention futile, as most men are, inherently, only able to react to that, the same way a hungry lion would react if thrown a juicy piece of steak, and told not to eat it….

Do the uncovered women captured in these images and industries, or parading around, realise or even care how many young girls are starving, purging and stressing themselves trying to mirror their image? No.

It seems they even take perverse pleasure in it. One barely-dressed singer even boldly and crudely sung recently, ‘Don’t you wish your girlfriend was hot like me?’

What is this women and her ilk saying??

What are they implying??

What are they doing to their sisters in humanity??!

So many poor girls, eroding themselves physically and mentally as they watch with jealousy and anxiety their partners ogle singers like this. Have the same thing occur to these women, these ‘idols’; have their partners swoon over another similarly attired, and witness their reaction! And when their daughters are molested by men they themselves, or women like them, have aroused, will they reflect?

Yeah, we see it reacting: ban the burqa!

It just amazes me how many women especially, despise my choice of dress. Yet, would they rather their husband’s secretary to be dressed like me or otherwise?

Would they rather the waitress serving the table at their anniversary dinner, be dressed like me or otherwise?

Is it me and my sisters who are turning their husband’s head, or attracting their boyfriends??

Is it me and my sisters who have led their daughters to anorexia, or their sons to pornography?

Whose mode of ‘dress’ is truly oppressive and harmful to women??

So now I’ve spoken, and although I am one, I speak on behalf of hundreds. I’ve explained to you that the majority of us have chosen this mode of dress, especially in the West. I have told you that we love it, we want it, and I’ve exemplified for you the inherent good in it. I’ve discussed here the issue of niqaab based on the suggestion that it is oppressive, or harmful to society, as this is the main reason stated by the French for the ban.

So to those of you who really are so concerned about ‘liberating’ me, then you will listen to what I have said, and let me and my sisters be.